Real people tell it like it is, Don’t want bad attitude… truth in these lyrics.

Back in early 1990, I picked up Stick it to Ya, by Slaughter. A few weeks later, Eye to eye

could be heard blaring loudly from my car on a daily basis. Ever since, every few months I have to pull that one song back out and listen to it. It’s on several of my Spotify play lists these days. It’s truly one of my favorite songs of all time.

I guess I should mention that music has played an absolutely huge part of my life since I was a kid. I spent most of my childhood with headphones on playing records in my bedroom, and practicing playing them on drums and guitar.

I recently saw that two of my favorite bands, Slaughter and Kix were playing together up in PA. I convinced my wife Caroline and long time friend and band mate Clay Campbell and his wife Bren, to take the 8 hr drive up to PA to see these guys.

The first night in our hotel, a familiar looking guy stepped onto our elevator with us. I thought to myself.. no way. This can’t be… 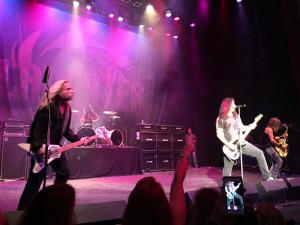 I blurted out the first thing that came to my head: Hey… are you going to see Slaughter tomorrow night? His reply was… I’m Mark Slaughter! We stepped off the elevator and proceeded to have a nice discussion with him. I mentioned a few facts so he’d know I really was a long time fan.

Like I mentioned, I’ve been very involved in music almost all of my life.. Played on the road at more bars, clubs and concert halls than I can remember, and have had the opportunity to open for some pretty big national acts. I’ve met a lot of people in the music business over the years, both as a player and as a fan… but I’ve never met a more nice and down to earth guy than Mr. Mark Slaughter. Mark invited us to sound check, and we hung out with him some after the show, which by the way blew me away. Marks vocals were just as amazing as they sound on his records from many years ago.

I love it when I have something fun to blog about.. and meeting someone like Mark, and his fantastic attitude … a real person… makes the song Eye to Eye, more than just a song.

PS.. Mark has a new cd out called Reflection in a rear view mirror. I really recommend this, it is fantastic! http://markslaughter.com/store.html

The areas newest subdivision for active seniors featuring brick and stone townhomes.
All yard work is maintained by the HOA, and our townhomes offer a roomy three bedroom floorplan with a sunroom, 2 full baths and a 2 car garage – the Villas in Stanley are convenient to golf courses, shops, restaurants, hospitals, and just 30 minutes from the charlotte airport!

if you’re an active senior 55 or older, come see for yourself the beautiful luxury awaiting you at The Villas at creek walk.

Call us today to schedule your personal showing!